The Big House is located at 2321 Vineville Avenue, Macon, GA. In 1969 it was for rent, and by January 1970, it became the house where members of the band, their roadies, friends and families lived until 1973. It was the focal point of gathering in those early years when the magic that is the Allman Brothers Band was just taking shape and radiating from this historic Southern town. 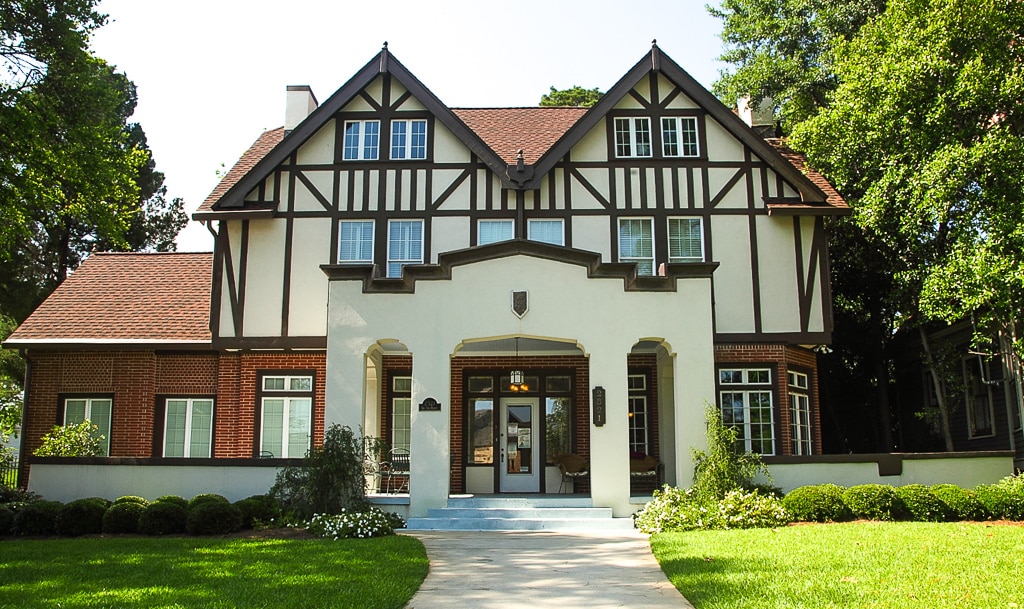 In January of 1970, Linda Oakley rented the house for Berry and her to live in while the band worked and recorded at Capricorn Records. The first to live there were Berry, Linda, and their daughter Brittany, Duane Allman, his lady Donna and their daughter Galadrielle, Berry’s sister Candy Oakley and Gregg Allman. Others came and went, but eventually the “Big House” was a place that was touched by all who were part of the extended family of the Allman Brothers Band.

Linda and Berry and their baby daughter were living in Macon in a one-bedroom loft over the apartment of Butch Trucks. Candy was living with them, using the couch in the living room as a bed. It was obvious they needed more space. The band was on their first road trip out West when Linda began looking for a place. Berry had given his OK and there was a little money coming in, so they could afford to move into something bigger. Linda, Candy, and Donna saw the ad for the house on Vineville Avenue and went over there to check it out. They were dazzled and enchanted by this large, three-story Grand Tudor house with its double lot surrounded by gardens filled with blooming wisteria, and fountains and a fishpond in the backyard. It was an elegant, majestic home with big sunny rooms filled with light, high ceilings, stained glass windows, fireplaces galore, a crystal chandelier and French doors. It captured their imagination; the three women saw their future in this place and plotted to make it theirs.

Candy was seeing Gregg Allman at the time, so with three couples chipping in on the rent they figured they could afford the $225 a month that Day Realty was asking for this glorious estate.

In December of 1969, Linda went down to Day Realty and put on her best “little homemaker with child” persona. She painted a picture of domestic bliss and the agency bought it. Candy got the biggest bedroom in the front of the house for her and Gregg, complete with fireplace and private bath. Duane and Donna took the bedroom at the opposite end of the house with the small adjoining room in between used as a nursery for Galadrielle. Berry and Linda took the rooms in the back of the house with a separate room for Brittany, a bathroom, and a back room that they turned into a communal music room.

Linda and Berry designed the music room and Linda hitchhiked to Atlanta to get the stereo. She put Indian prints on the walls and made it a warm and comfortable haven. The three stained-glass windows, along with Linda’s loving touches, made this a special spot for her and Berry. They had a private bathroom between this room and their bedroom and one of the unique features was a huge walk-in shower perfect for a couple, or a couple of couples, which she mentioned did occur from time to time! The third floor of the house is a large wide-open space with dormers and window benches and a vaulted ceiling. This was originally used as a ballroom when the house was constructed in 1900. Off of this big room are several small rooms that were locked when everyone first moved in. Shortly after arriving some of the roadies broke into these rooms and found them filled with wonderful antique treasures collected by the owners of the house. Linda mentioned a vintage upright piano and a big claw-foot table as well as many items from the Orient and Middle East.

It was learned that the owner was a military man who had done a lot of traveling. He had two daughters who made this third floor their bedroom and playroom. Many of these pieces found their way into the Allman Brothers Band household and added greatly to the grace of this stately mansion. They also had some wicker furniture that was given to them by Berry’s grandmother along with an old Victorian sofa with heavy brocade upholstery. The three women and two children were the real permanent residents of this house. Brittany and Galadrielle had the run of the place; their tiny footsteps would echo down through the hallways. There was always music in the house; Linda remembers getting up in the morning and putting on Miles Davis and gathering the women and children in the kitchen for a quiet breakfast. It was very idyllic. The band was gone most of the time and the women created a place of beauty and a retreat for their men to return to after their rough times on the road.

Other people came by and stayed as guests. Donna’s sister Joan stayed for awhile, and she was visiting when Willie Perkins was hired by the band to replace Twiggs Lyndon as road manager in June of 1970. Willie recalls that Joan was the only one home when he first arrived that day in June. She greeted him and took him to the kitchen for some iced tea. He remembers her opening the refrigerator, seeing two large mason jars filled with tea. One of the jars had silver duct tape around the top. This was to signify that it contained “electric tea.” The idea for the mason jars was no doubt taken from Mama Louise at the H & H who was serving tea in mason jars to the Allman Brothers Band in 1970 and still does today. The idea for the duct tape is an original one that may have been Berry’s as, according to Linda, he was in charge of the “electric tea.”

Willie slept in the living room for the first few months until he and his future wife Sandy found their own apartment a few blocks away. Kim Payne, a roadie for the band, moved in with Candy after she and Gregg ended their relationship. Donna’s sister Joan married Mike Callahan, another Allman Brothers Band roadie, and they stayed there together for awhile.

Willie remembered the first time there was any semblance of a royalty check for the band. He said everyone gathered in the music room to celebrate and decide how to split the check. This sharing was a part of the group’s philosophy. Family always came first, it was a pivotal element to the essence of the band.

The idyllic life was suspended when the guys came off the road. Linda said it was like a big reunion, and a honeymoon for the couples. Party time would start and the band would jam.

On the first floor, past the parlor, through the French doors, what was originally the sunroom suited the band’s purpose perfectly. This area was transformed into the music room – Duane put batting on the walls to muffle the sound, and they set up their instruments and equipment and practiced and jammed into the night. This was the time they would all get together and “hit the note.” This was Berry’s term. He was the one who organized these parties and gatherings. Berry and Duane shared a vision. Berry called it “hittin’ the note,” but it was a philosophy that transcended the music. It truly reflected a way of being.

The kitchen was large enough so the Brothers could gather there to write, share dreams and talk about their future. Dickey Betts remembered the kitchen and the quiet backyard as places where he would work on his songs. Dickey wrote “Blue Sky” in the living room and “Ramblin’ Man” in the kitchen. The guys bought a pool table with a red felt top and put it on the third floor where they would play and talk for hours. This idyllic time, however, came to an end much too.

On October 29, 1971, a birthday party was planned for Linda. Duane came over to the house (he was now living elsewhere with his new lady Dixie) with a big bouquet of flowers for the party. Linda said everyone was busy fixing Jack O’ Lanterns for Halloween and Duane said, “Let me do the eyes, the nose and the mouth.” He left the house on his motorcycle and never returned. Dixie came to the house and stayed for a while after Duane died, and in February of 1972, Dixie, Candy, and Linda all went to Jamaica together. When they returned Dixie went back to Atlanta.

Berry tried to keep the vibe going, but something died in him with Duane’s death. He told Linda that the hellhounds were on his trail. He began having nightmares and was drawn more and more to the dark blues of Robert Johnson and Elmore James. Then sadly, Berry followed Duane to the grave a little over a year later on a motorcycle on the streets of Macon.

Linda went away to Florida for Christmas to be with friends and family and to try to heal. When she returned in January of 1973, there was an eviction notice waiting for her; apparently the publicity surrounding the band led to the eviction.

Willie Perkins recalled that his strongest memories of the Big House were his first few moments there and then the last moments; the funerals. He said that years later when the band had broken up, the Big House was empty, Capricorn Records was defunct and Great Southern, the T-shirt company, had folded, you could drive around Macon and never know the Allman Brothers Band had ever been there.

Well, all that has certainly changed. The Allman Brothers Band reformed as a group in 1989 and it has been a great ride for the band and their fans ever since. Then in June of 1994, Warren Haynes, Matt Abts and Allen Woody took up residence at the Big House. They took over the Archive rooms and set up their instruments and equipment and rehearsed for eight days before they headed out to do their first shows as Gov’t Mule.

The Allman Brothers Band Museum at the Big House guarantees that the dreams, music, and legacy created so long ago by the band will live on; your support of the Big House Foundation makes this possible, and we thank you for your contributions.